of the Flint Firebirds 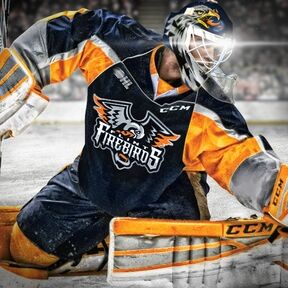 The Flint Firebirds are a major junior ice hockey team based in Flint, Michigan. The team plays home games at the Dort Federal Credit Union Event Center and operates as a member of the Ontario Hockey League (OHL).

In June 2019, the Firebirds announced the Leamington Flyers (GOJHL) as an affiliate.

The Firebirds trace their roots back to the 1990–91 season when the Detroit Compuware Ambassadors were added as an expansion team in the OHL. Since then, the franchise has been the Detroit Junior Red Wings, the Detroit Whalers and the Plymouth Whalers. On January 14, 2015, it was announced that longtime Whalers owner Peter Karmanos had sold the team to IMS USA, Inc., with the intention to move the franchise to Flint and the Perani Arena. The purchase and relocation were approved by the OHL on February 2, 2015.

Although there was sentiment towards resurrecting the Flint Generals nickname that had been used by two past teams in the city, the OHL quickly nixed that idea because of the Oshawa Generals using that name. Likewise, a popular suggestion was the Flint Tropics, after the fictional American Basketball Association team of that name in the 2008 movie Semi-Pro. However, after various others voiced their displeasure at their team possibly being named after a comedy movie's protagonist team, and the chance of the novelty wearing off after a while, the name did not make the list of finalist choices.

Come see us at the Dort Financial Event Center, in the lobby.